I created a Flash game once. 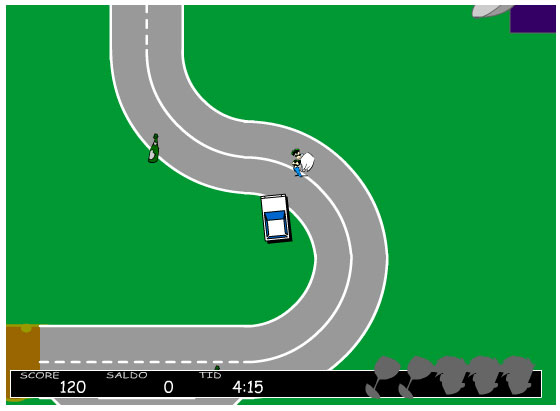 It’s more than a decade ago now. It was back in the times when when Flash was cool and the original IT bubble had just blown to smithereens. I was fresh out of university and had little in terms if financial obligations so when I was offered a freelance contract to create a Flash game, I happily accepted.

The game was directed at a Danish audience and point of the game was to campaign against drunk driving and to promote the idea that young females, known to have been endowed with far more common sense than young males, should be assigned “guardian angels” for the dimwits in the latter group.

I was given a fair amount of creative freedom to design both the gameplay and the humour. In reponse to this freedom I pretty much based the gameplay upon an ancient C64 racing game, the name of which I had already forgotten at the time. I based the humour upon puerile drawings and animations which I drew up fairly quickly using a tablet.

At the auto dealer you could upgrade your car. I tried to pick six makes and models which I considered dubious taste. Interestingly, I’m currently driving a Skoda Felicia in real life.

The game code was implemented in Flash Actionscript. As I recall, the language was more or less an extension to Javascript which is an interesting choice since this is before anyone envisioned Javascript ever joining rank with the cool kids. The editor was kind of shoddy and it was apparent that Flash was mostly designed as a tool to create linear animations; scripting seems to have been added as kind of an afterthought. I can’t really say that I enjoyed the language. Still, I managed to finish the game in about one month of effective work (in reality more like two months with integrated procrastination).

The race courses were all autogenerated with a random seed based upon the name of the place where the course was supposed to be located (I made a conscious effort to pick the silliest sounding place names that I could find). By autogenerating the course but fixing the seed, I was freed from manually creating a large number of courses, yet the course would stay the same at all times. When playing the game it’s apparent that the quality of the courses vary quite a bit. 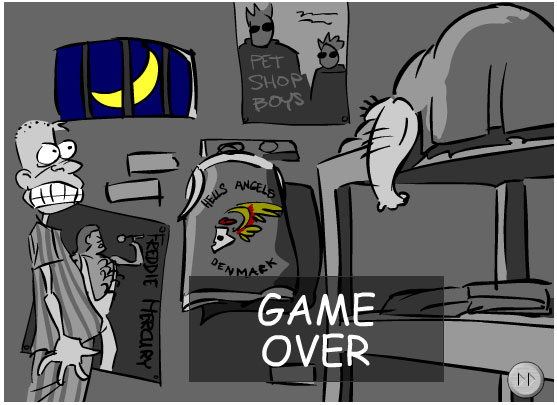 The protagonist goes to jail. Admittedly a puerile drawing.

The pay? A handful of glass beads as far as I recall. And a shot a doing something fun, maybe as a career. As it turned out this was pretty much all the Flash I ever did and a few months later I got a regular job as a Java developer. I have no regrets about this. Working with Java has been more fun that working with Actionscript would ever have been; and working on teams has been far more fun than working by myself ever was.

You can test drive the game here (providing that you have Flash installed).

[Quick instructions: At the login screen, enter anything in the bottommost input field. When driving, steer with the cursor keys and use space to brake. Make a full stop close to the guardian angels to pick them up. Try to stay clear of the drinks and by all means, don't hit the girls with your car].